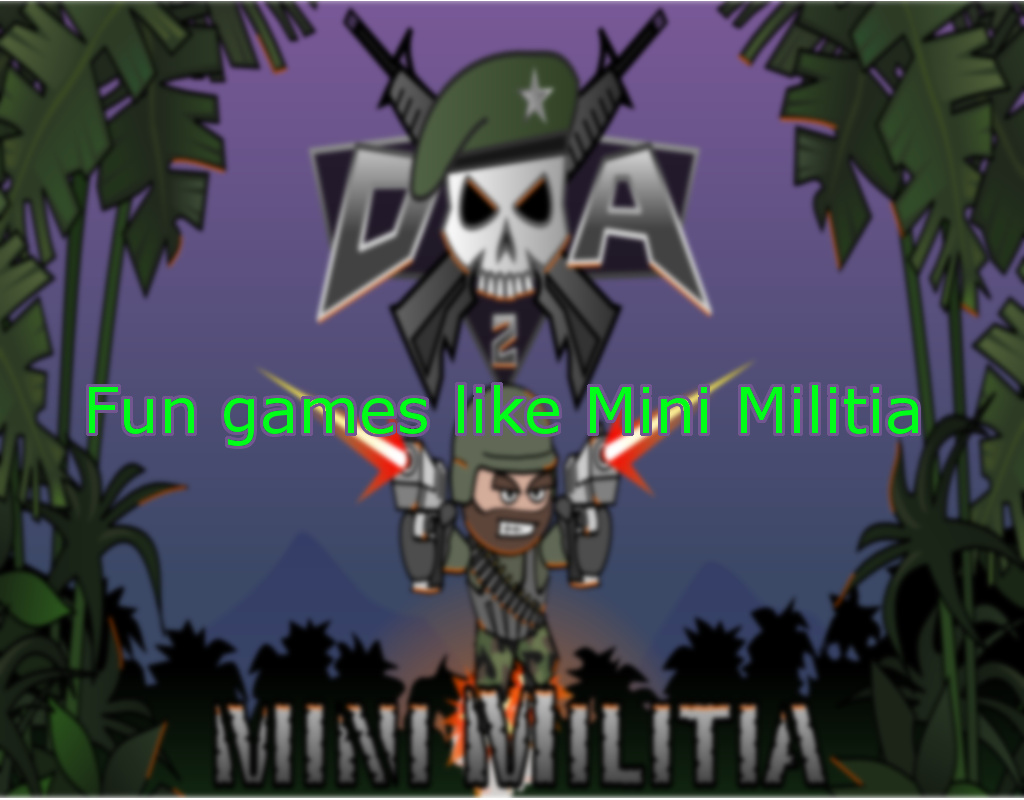 If you don’t know, mini militia or doodle army 2 is a 2D platformer shooting game by Appsomniacs. The game first came out on iOS in April of 2011 & became available on Android by early 2015. The game has a very large player base with tens of thousands people playing every day.

It used to be a very popular online shooter and still is after all this time. I am a huge fan of mini militia myself. I got hooked up to this game 2 years back and even dragged some of my friends in too.

But no matter how good mini milita is, there are always some people who are going to look for some alternatives or similar games. They might want to try something similar yet different than mini, want another game to play if got bored by mini militia or the biggest reason, cheaters and modders in online modes.

No matter whatever is your reason to look for other games like mini militia, here are 8 games similar to doodle army 2 or mini militia. It offers various single player & multiplayer modes, you can either play offline or online. But the offline LAN mode is where it really shines. you can team up with your friends (8 on each team) and play this game locally via hotspot. You can also play against AI(bots). As it a mobile fps game it does offer you smooth aim and auto shoot, which I recommend turning if you want to enjoy the game to its full extent.

Special forces group 2 has various maps to choose from, including some maps like dust from the old-school counter strike. The game also offers various play modes like Classic mode, Zombie mode, Deathmatch, Capture the Flag etc.

You have various type of guns, grenades and other weapons to choose from. However, the guns, in my opinion, are not that balanced but are still fun to play. Take shotguns for example. you can 2-shot a guy who is a yard away from you.

It has support for skins and various knives which obviously cost you money but just like doodle army or mini militia, SFG2 is available on both Android & iOS as a free-to-play game.

Game By: ForgeGames | Get it on: Android Neon shadow is another excellent FPS game on our list. The games feature sci-fi space action and are one of the best first-person-shooter game to play with your friends over LAN/WIFI hotspot.

The game has a sci-fi theme with some sick weapons to go along. It also features various attributes, pathways, and props according to maps. The game modes in neon shadow include an instant kill mode(one-shot kill), deathmatch mode & mutant mode where the person who first gets a kill becomes mutant and is granted with mobility speed & more damage until he is killed.

You can customize the color of your character as per your liking just before a battle. Team play is not available in neon shadow but you can play single player modes versus your three friends. Both online and offline modes are supported. The game also features a campaign mode which you can play solo.

The game is available for free on Android and on iOS, you need to pay 5$ to enjoy this game.

Game By: Crescent Moon Games | Get it on: Android One of the top candidates for this list of games like mini militia is the Bomber squad. Bomber squad is a 3d platformer game by Eric Froemling.

I have played this games non-stop for hours while trying to make my mark on the leaderboards, but the game is most enjoyable with friends in the onslaught, capture the flag modes and I have enjoyed every second of it. You will feel the same way after playing bomb squad because it is so fun & addictive that you keep coming back to it.

You have various moves by which you can attack your enemy you can jump over them, you can throw them, push them and of course blow them up with a bomb. Bomber squad offers you various playing options like singleplayer, multiplayer both online and offline with LAN/WiFi.

You can also play campaign mode if you want a challenge. There are various game modes like Onslaught, Capture the Flag and many more. There are many different types of platforms that you can try, each comes with their own perks and disadvantages.

The only bad thing that I can think about this game is the intrusive ads, other than that the game is a must try for mini militia fans.

Game By: Eric Froemling | Get it on: Android Another great contender for this list of games like mini militia, Soul knight is a classic RPG game for mobile platforms. This game created with Unity engine is a wonderful piece of Pixelated art.

This game features randomized levels and enemy placement, just like Binding of Isaac and some popular Rogue RPGs for PC. You can find over 170 plus weapons across its randomized dungeons and various other mele and special weapon as well.

To play with your friends you will just have to connect to the same network or one player has to start WIFI hotspot and others will have to join his WIFI. You & your friend will be granted a random ring and you can now move on. one thing to keep in mind is that the game can not be played versus your friend, you and three of your friends will have to play as a team (Co-op).

If you want to take a break, you just have to leave the game and the next time you fire up soul knights you be right where you left. The game is a nice contrast between RPGs and shooter games like mini militia. If you want a Co-op alternative to mini, you can check soul Knight out.

Game By: ChillyRoom | Get it on: Android The game is made with “Unity” engine and when you will first land on the start screen you will realize that the game needs more development. That is why the game is currently in beta.

The game features various playable ‘environments'(levels) and some guns as weapons. You can either play offline (LAN/single-player) or online with other players. Like some other FPS for Handheld devices, Local Warfare also has smooth aim and auto fire settings.

The gameplay is not very smooth and the controls, especially the fire and scope in/out in my opinion are poorly placed but they can be customized easily

Local Warfare is only available for Android at the movement but an iOS version might release soon.

To be honest the game is quite a disaster if you look at the offline & online modes. But the LAN mode can be fun to play and with some changes in the controls, you will be good to go.

Game By: Dazad | Get it on: Android This game is a little bit similar to the famous zombie shooter Plants VS zombies. First, you and your friend(if playing multiplayer) will spawn in an area filled with rocks, trees, and other stuff, you continue to collect material and craft stuff until night.

But Once the night falls, things change very quickly, the game which was looking very manageable and easy to play transforms into monster hell. Waves of monsters start to appear in front you with the intent to kill, you will have to defend yourself while collecting & forging stuff simultaneously.

The game has various ‘Minecraft‘ like building materials that you can use to forge weapons and other necessary equipment. Pixel Survival 1 is a part of the Pixel Survival Game series by Cowbeans. The other games in this series, namely Pixel Survival 2 & Pixel Survival 3 are also fun to play and are worth checking out.

Game By: Cowbeans | Get it on: Android MilkChoco is another excellent game to play if you want a multiplayer co-op game to play with your friends. The game does not support LAN game modes and but an only offline single player and online multiplayer.

The movement mechanics are very easy to learn, you move your character with the given joystick and change angle with the joystick on the right side. There is no need to fire the weapon, just aim at the enemy and it will start to fire. If you want to win a round in Milk Choco you need to run ‘n’ gun.

Milk Choco has various servers located around the globe so you won’t be facing high ping issues.

When you click ‘Play’, you will be placed in a deathmatch server with other players. The goal is to kill as many players as possible before time runs out. you can also play versus or with your friends by joining a clan or inviting them to your game room. In recent updates, a Battle Royale mode has also been added to the game.

Game By: GameParadiso | Get it on: Android The thing which is very interesting about Lost guns is that you can create your own custom map to play with your buddies or other players.

The reason why l like this game so much is because if its simple gameplay. The controls are also very easy & simple, you just have to move your character around, no need to aim. When an enemy comes in front, you just press the trigger button to shoot.

In this game, you can acquire many different guns, including rifles, snipers, SMGs & shotguns. You can also use melee attacks and grenades. Overall the game is very fun to play and just like the games on this list, is most enjoyable if you have got some friends to play with.

Game By: SUPERCAT | Get it on: Android

So, we are at end of the list now, as I have said before I am a huge fan of mini militia and still play it despite all the hackers and modders that are ruining the game for others. It was one of the first, if not the first game that I enjoyed on LAN with my friends.

While LAN/WiFi gameplay is still good in this game, the online part is getting worse day by day, like you need the Pro pack to dual-equip weapons and even to pick-up some guns like snipers, RPGs etc, this is outrageous.

Anyways regardless of your reason for searching for other games like mini militia, thanks for making it to the end.I hope you are satisfied with the list that I came up with. If not, do write in the comments below what you didn’t like and if you have any other suggestions, do mention below, Thanks.